Find a Lawyer in Georgia 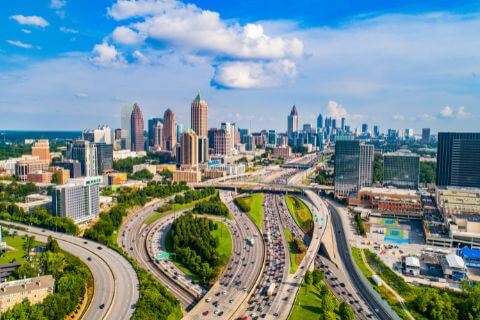 Need a lawyer in Georgia?

Georgia was founded in 1732 as the Province of Georgia. It was first settled in 1733. In 1752, it became a British royal colony. It was the southernmost and last of the original Thirteen Colonies. The Georgia Colony was named after King George II, Great Britain. It covered South Carolina from south to Spanish Florida, and west to French Louisiana at the Mississippi River. Georgia was the fourth state to ratify The United States Constitution on January 2, 1788.

From 1802-1804, western Georgia was divided to create the Mississippi Territory. Later, it was recognized as the U.S. state of Alabama and Mississippi. Georgia was among the seven Confederate States that declared secession from the Union in January 1861. Georgia was the last state to return to the Union after the Civil War on July 15, 1870. The post-Reconstruction period of the late 19th Century saw Georgia's economy transform as prominent politicians, businessmen, and journalists led by Henry W. Grady promoted the "New South" philosophy, which emphasized sectional reconciliation, industrialization, and white supremacy.

Many prominent Georgians were leaders in civil rights movements during the 20th century. Atlanta hosted the 1996 Summer Olympics. This event marked the 100th anniversary of the modern Olympic Games. As part of the larger Sun Belt phenomenon, Georgia has experienced significant population growth and economic growth since 1945. 14 Georgian counties were among the 100 fastest-growing in 2008 and 2007.

About the Georgia Legal System

Georgia has approximately 27,227 lawyers who are certified by the Georgia State Bar. It is important to research the backgrounds of lawyers when searching for representation. LegalMatch is a free and easy way to find lawyers. It allows you to screen potential candidates before they match them with clients.

The Georgia Court System includes five levels of trial-level courts that can hear cases. The Magistrate and probate courts, as well as the state, juvenile, and superior courts. Georgia has approximately 350 municipal courts. The Constitution of Georgia gives the courts of Georgia the authority to hear specific types of cases. The courts that have limited jurisdiction are the ones with the most common legal issues, such as municipal, criminal, or state courts in the Georgia counties, which are the first to be contacted by citizens.

How much does a lawyer cost in Georgia?

How do I find a lawyer in Georgia?

How many active attorneys are there in Georgia?

There are approximately 18,500 active lawyers in the state of Georgia. This number reflects all lawyers registered with The State Bar of Arizona.

Who licenses attorneys in Georgia?

The Georgia State Bar licenses all attorneys in Arizona. A lawyer that is not licensed with the state bar association cannot practice law in full capacity.

Select a City in Georgia

Select a County in Georgia